Calgary Plastic Surgery Centre now offers the state of the art Ultra Femme 360™, a non-surgical vaginal rejuvenation treatment which uses ultrasound energy as well as radio frequency energy to transform the vagina and roll back the clock.

Without surgery or downtime, Ultra Femme 360™ tightens and lifts labial folds and tightens the vaginal canal. The procedure triggers the body to rejuvenate the vagina by increasing blood supply to the treated areas and rebuilding new collagen. It can also help treat incontinence and the problems that come with menopause such as itching, burning, dryness, and painful intercourse.

The beauty of this procedure is that it is not only a “face lift” for the vagina but also and enhances sensitivity and improves vaginal health. Call us today at (403) xxx-xxxx to schedule your free consultation.

How Does the Ultra Femme 360™ Tighten the Vaginal Tissue?

Ultra Femme 360™ vaginal rejuvenation uses two specifically designed disposable ultrasound and radio-frequency energy probes to treat vaginal tissues. Treatment increases blood flow and stimulates the regeneration of collagen fibers in the labial region and vaginal canal. There is one probe for exterior and another probe for the interior treatment of the vaginal canal. (Note: At this time, the internal probe is not available for use in Canada but will be coming soon).

The heated collagen tissues will rearrange into a stronger, tighter collagen matrix. This offers many benefits including both increased sensitivity and skin tightening in the regions treated.

Exterior Treatment – We can plump Labia Majora, lift and firm the Labia Minora, tighten the Introitus (vaginal opening), increase blood flow to the Clitoris and more!

Ultra Femme 360 is a painless, effective, non-surgical alternative to vaginoplasty and labiaplasty procedures.* It’s the only technology of its kind to offer complete vaginal rejuvenation with a single handheld device – in eight minutes flat.* Ultra Femme 360 uses radio frequency energy to stimulate collagen production and restore the vagina and labia to a more youthful state.* Benefits of Ultra Femme 360 can include:

How many treatments will I need and when will I see the results?

The protocol for Femme 360 is 3 treatments spaced 1 week apart. It is not painful and there is no downtime. Tightening results are seen after the first treatment session. With each additional treatment, there is more tightening. Additionally, as collagen is being re-built and blood supply is increased, rejuvenation results will continue to improve over several months.

How long is the recovery period?

There is no downtime for the ULTRA Femme 360 procedure. You can return to your normal activities immediately after the procedure.

Is the procedure safe?

The ULTRA FEMME 360 procedure meets strict safety standards. The built-in Energy Flow Control system provides uniform heating during the therapy. For you, the patient, it means the treatment is without any discomfort, while the optimal amount of energy reaches the target tissue. Due to heating at lower temperatures compared to ablative lasers, there is pain and no injury to tissues which means no risk for infection or discharge.

Am I a good candidate?

This is a great procedure for anyone who given birth, is over 35 years old or is just looking to stay ahead of the aging game. ULTRA FEMME 360™ vaginal rejuvenation rebuilds collagen and promotes a healthy vagina by increasing blood flow and remodeling tissues. Vaginal rejuvenation is not just a “facelift” for the vagina, it has quickly become one of the most popular procedures today!

How does Ultra Femme 360 compare to Mona Lisa Touch and other treatments?

Femme 360 delivers heat energy to the target tissues using ultrasound and radio-frequency energy. There have been no reported complications or burns. It is very precise and controllable and outcomes have been consistent.  Some patients experience mild redness and swelling at the treatment area, but these symptoms typically subside within a few hours.* The whole procedure is non-invasive, and you can resume your daily activities immediately afterward.*

Mona Lisa Touch uses CO2 laser which is an ablative laser. Ablative lasers vaporize (burn) any tissues that they target and the procedure has reports of pain and burning as well as recovery time required for healing.

Conversely, Femme 360 heats but does not burn tissues so there is no recovery time.

Additionally, Femme treatments are spaced at 7 days so they are closer together then the competitors technology.  The full Femme 360 3 treatment treatment regime is possible in just 15 days.

Will I need additional treatments after the initial procedure and if so how often?

The protocol for Femme 360 is 3 treatments spaced 1 week apart. As collagen is being re-built and blood supply is increased, results will continue to improve over several months.

We recommend “maintenance treatments” every 6- 12 months to continue to prompt new collagen and promote rejuvenation. 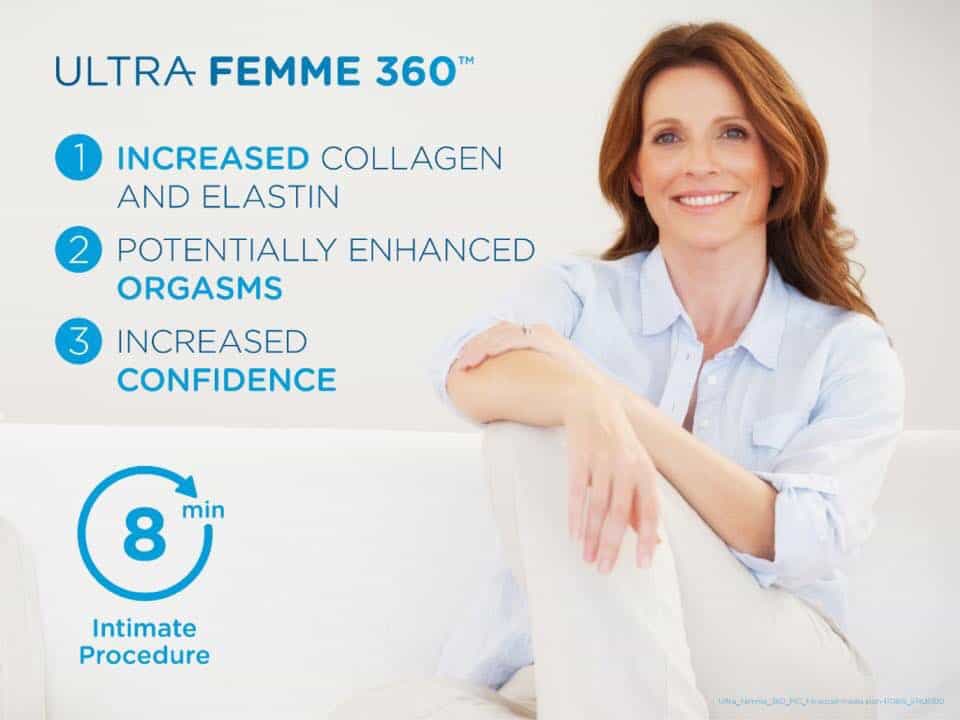